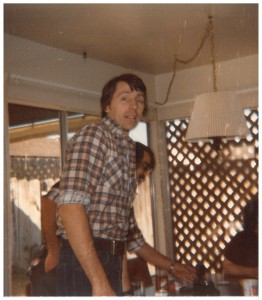 On August 10, 1993, Pamela Richards was manually strangled, severely beaten with two fist-sized rocks, and her skull was crushed with a concrete stepping stone. At the time of her death, Pamela lived with her husband, Bill Richards, in a remote desert community in San Bernardino, California. The couple was in the process of building a home on their property. They were temporarily living in a motor home and running their power from a gasoline-powered generator.

August 10, 1993 started as a typical day for Bill. Neighbors reported seeing him and wife Pamela walking and holding hands. Co-workers reported that Bill worked a normal shift and didn’t seem agitated in any way. Bill clocked out of work at his usual time and filled his ice chest with ice from a machine at work because he and Pamela did not have refrigeration at their property. Bill drove home, arriving just after midnight, and was surprised to find that there were no lights on inside the motor home or on the property. He went to the shed, restarted the generator, and then walked toward the motor home to find Pamela and ask her why the generator wasn’t running. As he walked toward the motor home, he tripped over Pamela’s half-naked body. When he reached down to touch her, he discovered her head had been bashed in and her brain exposed. He immediately called 911, and when police didn’t arrive immediately, called two more times over the next half-hour.

Police failed to secure the crime scene while they waited for first light. Dogs roamed the property, obscuring footprints and blood evidence, contaminating the scene, and partially burying Pamela.

With the police unable to place anyone else at the crime scene, Bill was charged with his wife’s murder. He had no defensive injuries and gave no confession, yet after three trials a jury convicted him based on evidence of bitemarks on Pamela’s body that allegedly matched Bill.  He was sentenced to life in prison.

Had police conducted a proper and timely investigation in the early morning hours of August 11, 1993, evidence could have been gathered that would have cleared Bill. He presented a clear timeline of when he clocked out of work and how long it took him to drive home. Police could have conducted simple time of death tests to determine how long Pamela had been lying dead on the ground. Fingerprinting of the couple’s home, shed, cars, and the two fist-size rocks used to beat Pamela could have led to other suspects. Swabbing the bite mark on Pamela’s body could have garnered saliva that could be used for DNA testing. Police did none of this. And while some DNA testing was done on some of the evidence at the crime scene using the technology available in the early 1990s, that testing was inconclusive and not enough to help Bill avoid life in prison.

In 2001, the California Innocence Project filed a post-conviction DNA testing motion on Bill’s behalf. The items sought to be tested included the murder weapons, several items at the house that were covered in blood, and the hairs found under Pamela’s fingernails. The testing revealed that the DNA on the murder weapons and the hairs under Pamela’s fingernails belonged to neither Bill nor Pamela.

Judge Brian McCarville of the San Bernardino Superior Court granted William an evidentiary hearing to present his evidence beginning in January of 2009. The hearing took place over several days in the spring and summer months of that year. At the hearing, the California Innocence Project challenged the state’s evidence presented against Bill at his 1997 trial. Two bite mark experts who had previously testified against Bill in 1997 explained to the court how current bite mark science excluded Bill as the contributor of the mark found on Pamela. A blue fiber found at autopsy under Pamela’s fingernail supposedly matching the shirt Bill was wearing that night was missing from photographs of the Pamela’s fingers before police moved Pamela from the crime scene to the morgue, leading to the possibility that the fiber was planted there in the crime lab. And, of course, the California Innocence Project presented the DNA evidence showing another man, not Bill, wielded the murder weapon and struggled with Pam before she died.

At the conclusion of the hearing, Judge McCarville determined the totality of the evidence presented required reversal of Bill’s conviction: “Taking the evidence as to the tuft fiber . . . and the DNA and the bite mark evidence, the Court finds that the entire prosecution case has been undermined, and that [Bill] has established his burden of proof to show that the evidence before me points unerringly to innocence. Not only does the bite mark evidence appear to be questionable, it puts [Bill] as being excluded. And. . .the DNA evidence establishes that someone other than [Bill] and the victim was at the crime scene.”

On May 26, 2016, the California Supreme Court reversed William Richards’ conviction in a 7-0 decision, finding the bite mark evidence was central to the conviction and all other prosecution evidence had been met with substantial resistance by the defense. On June 21, 2016, Bill walked out of the West Valley Detention Center, having been granted release on his own recognizance while awaiting a potential fifth trial.

>> Read the next story, Ed Contreras.