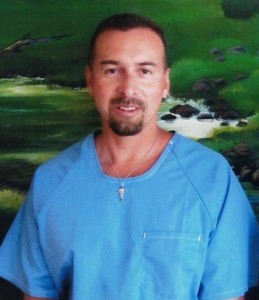 Edward “Ed” Contreras had no idea that going to a barbeque would forever change his life. On August 9, 1995, Scott Taylor invited him along with his closest childhood friend, Frederick “Freddie” Walker, and a girl he was interested in named Lisa Garringer, to a barbeque at his parents’ cabin located off a remote country road in Bouquet Canyon, California.  The plan was that the group would spend the weekend at the cabin.

It was a typical barbeque until a fistfight broke out between Scott and Freddie. Freddie fell to the ground and hit his head on the concrete, causing him to go into convulsions. Scott then picked up a machete and began to chop into his best friend’s head and body.  Terrified, Ed and Lisa ran inside the cabin. Lisa frantically tried calling her mother and friends for help while also trying to keep Ed calm so Scott wouldn’t kill them as well.

Meanwhile, outside, Scott killed and dismembered Freddie. Scott was surprisingly calm and appeared in awe of what he had accomplished. He took a break in this gruesome escapade to have sex with Lisa. She did not protest. She couldn’t. Not at the risk of losing her life. Scott returned outside and placed Freddie’s remains into trash bags and then into a garbage can. He hosed off the outside patio where he’d taken Freddie’s life.

Lisa managed to escape when her mother called Scott and told him Lisa had a dental appointment the following morning and it was time for her to come home. Ed, however, was not so fortunate. He had to stay and placate Scott, trying not to alarm him, and waiting until an opportunity presented itself for him to escape.  That opportunity came when Scott’s parents arrived at the cabin.

Once free of Scott’s presence, Ed remained terrified of Scott. Neither he nor Lisa called the police out of fear that Scott would find out and kill them or their families as well. Ed spent his days staying at friends’ houses in case Scott tried to find him at home. According to friends, Ed appeared “scared and nervous” in the days following the murder, but when questioned about what was bothering him, he could not bring himself to tell them. Lisa was doing the same. She was rarely at home and started drinking heavily and doing every drug she could get her hands on. Ed was about to confide in his pastor about what he should do when the police arrested him for Freddie’s murder.

The police arrested Ed for Freddie’s murder because Lisa confided in a friend about what had happened. When police questioned seventeen-year-old Lisa in her fragile state, they told her they already knew what the two men had done to Freddie. Lisa took this to mean that the police wanted her to say both Ed and Scott killed Freddie, which she did. She was terrified that if she didn’t tell the police what she thought they wanted to hear – a story matching their two person theory – they would deport her mother (who was not a U.S. citizen) and arrest her for not reporting the crime earlier. Once Lisa implicated Ed in the murder, she was too scared to take her statement back. She was afraid it might somehow result in Scott being let go and she did not want that to happen.

For years following that police interview and initial lie, Lisa thought about what she’d done every day. It was not until 2009 that she had the strength to accept responsibility for her lie and to come forward and tell the truth about what really happened that fateful day at Bouquet Canyon. At an evidentiary hearing in 2011, Lisa recanted her testimony implicating Ed in the murder. Not only did the physical evidence indicate that Lisa’s recantation was the truth, but numerous other witnesses supported Lisa’s version of what really happened including Scott, Ed, her mother, a city employee named Mike Lewis, and even the original prosecutor on the case.

Sadly, despite the truth finally being revealed, a Los Angeles Superior Court judge did not reverse Ed’s conviction and end his nearly two decades of wrongful incarceration.  The California Innocence Project continues to pursue Ed’s case in the courts, but his best chance for relief is likely through clemency.

>>Read the next story, Alan Gimenez.