The year was 1999 when Justin Brooks, inspired by Marilyn Mulero’s ‘92 wrongful conviction, co-founded California Innocence Project. Nearly twenty years later, Justin and the rest of his staff have helped to free 28 innocent people from prisons across the state. Since its founding, CIP has grown into a dedicated family of attorneys, volunteers, exonerees, and an extended family of supporters across the world who know that wrongful convictions occur, and that they can happen to anyone. The simple fact that being in the wrong place at the wong time could lead to being imprisoned for a crime you did not commit is a terrifying reality which continues to happen in our very own state. Justin Brooks founded CIP with three goals: 1) to free innocent people from California prisons, 2) to provide outstanding training for future lawyers, and 3) to implement legislation that will decrease the number of wrongful convictions before they happen.

Since ‘99, CIP has worked tirelessly to fulfill those goals. No matter how hard CIP works however, some clients have exhausted all of their legal avenues for relief – even though they have strong cases for innocence.  In these cases, our help can only go so far. The California Twelve are twelve such cases. Twelve innocent clients, yet there’ practically nothing we can do by way of the courts. Thus, “The CA 12.”  The last hope for these twelve people rests in the hands of the Governor of California, who has the power to grant clemency.  Having no other options, CIP has petitioned the Governor to grant clemency to the CA 12.

Knowing that the freedom of these twelve clients depends on the signature of Governor Brown, Justin decided to hand-deliver the twelve clemency petitions in a way Brown could not ignore. Five years ago, Justin set out to walk from San Diego to Sacramento.  Thus, the Innocence March was born. That first Innocence March was a 712 mile, 55-day journey from CIP headquarters in San Diego to the steps of the California State Capitol in Sacramento. The Innocence March was a means of urging Governor Brown to help these innocent men and women, as well as raise awareness about the issues that plague our justice system. Since his completion of this 712 mile trek for clemency back in 2013, Governor Brown has done very little help the CA 12. Presently, Governor Brown’s time in office is coming to a close. As of September 30th Governor Brown will have 100 days left in office. And Justin has not given up on the CA 12.  To mark the last 100 days of Jerry Brown’s governorship, and to make one last appeal for his clemency, Justin Brooks is setting out to re-walk the last 100 miles of the Innocence March.

Innocence March 2018 will begin on the campus of UC Berkeley, where a kick-off rally will be held to send him off on yet another effort to exonerate the innocent. The 100 mile march will take Justin seven days.  That journey will culminate on the steps of The State Capitol Building where he with all of you will demand that justice be served.

Though Justin will walk the 100 miles on his own, he wants as much support as possible to show Governor Brown that he is not alone in his fight to free those wrongfully convicted. Justin hopes you can show up to at least one of the rallies being held.  The kick-off rally will be at UC Berkeley on Sunday, September 30th, 2018 at 5:00 p.m. The final, grand rally event will be at the California Capitol steps on Sunday, October 7th at noon. Justin is also hoping you can walk the last mile with him. Those interested are to meet at 11 a.m. at the Tower Bridge in Sacramento.

If you’re unable to be present for either rally, please help raise awareness about the Innocence March by liking, sharing, retweeting, reblogging Innocence March social media posts!  You can help Justin walk this long road for Justice. We thank you for standing with him and The CA 12.

On Sunday, September 30th at 5 p.m., Justin Brooks sets out on a 100 mile march to raise awareness about wrongful convictions, and the plight of twelve innocent CIP clients in particular, the CA 12.  The Innocence March culminates and ends after the 100th mile on the steps of the California State Capital – where Justin and all those present at the rally will demand that Governor Jerry Brown at last grant clemency to the CA 12.  We hope to see you there! 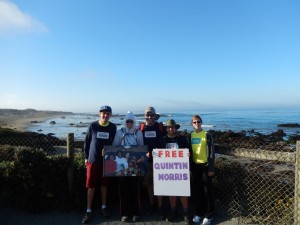 Please read our clients’ stories to learn of the importance of this march, and how crucial it is that the Governor hear our message.  On October 7, 2018 the 100 mile walk will culminate in a rally at noon on the steps of the State Capital.  You are invited!