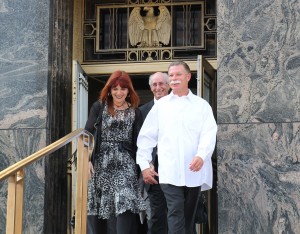 Convicted of: Possession of a Concealed Weapon

In 1999, Daniel “Danny” Larsen was convicted of possession of a concealed weapon after two police officers testified they saw Danny toss a knife under a nearby car in the parking lot of a bar. Unfortunately, Danny’s trial attorney failed to discover as many as nine percipient witnesses to the “knife toss,” including a former Chief of Police from North Carolina, who saw another man, not Danny, toss the knife. Danny’s trial attorney, who is now disbarred, did not call a single witness on Danny’s behalf. Nor did he even bother to give an opening statement in the case. As a result, Danny was convicted and sentenced to 27 years-to-life in prison pursuant to California’s Three Strikes Law (Danny had prior convictions that occurred nearly a decade before the “knife toss”).

The California Innocence Project collected statements from many of these witnesses and presented the evidence to the California Superior Court in a petition nearly 150 pages long. The petition claimed that Danny was innocent and that Danny’s attorney was ineffective for failing to present these witnesses at Danny’s trial. The court denied the petition in less than 24 hours, suggesting it had not even taken the time to read it.

After the California Appellate courts denied review, Danny took his case to the federal courts. Finally, eleven years after his conviction, a federal district court took Danny’s case seriously, held an extensive hearing, reversed Danny’s conviction, and ordered him released. The court found that Danny had shown he was innocent, found that the police officers at Danny’s trial were not credible, and found that his trial attorney was constitutionally ineffective for failing to call witnesses on Danny’s behalf. Before Danny was released, the Attorney General appealed the judge’s ruling. It has been nearly two years since Danny was exonerated and he remains incarcerated. Interestingly, one of the Attorney General’s main arguments is not whether Danny is innocent, but whether he presented proof he was innocent quickly enough – a legal technicality that would keep him in prison for life.

*On March 19, 2013, the Federal District Court released Danny pending the continued appeal by the Attorney General.  The US Supreme Court is set to decide a case called McQuiggin v. Perkins later this summer.  On the table is whether inmates like Danny need to file innocence claims within a specific time frame.

>>Read the next story, Kimberly Long.